Interview with David Evans, Director of our next production “Valentines” 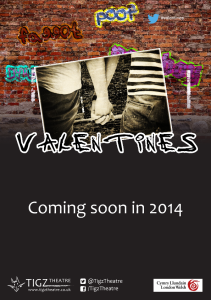 With only a few months to go until our production of Valentines we thought we’d ask the Director of the production David Evans to tell us a little more about the project.

What is the inspiration behind Valentines?

The inspiration came from a conversation I had with the CEO and cultural development officer of the London Welsh Centre (where Tigz Theatre is based) about our 2014 season. We were discussing link in projects, as we are looking at creating a full day of events around our production of Tea With Mamgu which deals with Dementia and failing memories. The production is going to be restaged during Dementia Awareness Week in May and when the conversation moved onto our production in February I suggested that we create an event for LGBT history month. The project then developed from there as we looked into the history of the LGBT civil rights movement and decided to try and tell the story of how LGBT rights have progressed in the last 100 years since the start of the First World War.

And why the name Valentines?

Because it’s a brand new production with written and devised elements we started off calling it “the LGBT project”. When in October our marketing team asked for a name for the show we were a bit stuck as nothing has been confirmed other than the date of the performance – Friday 14th February 2014. It seemed sensible to the marketing team that as the project is about who we love and is performed on the feast of St Valentine that it should be called Valentines after that the name just stuck.

You mentioned this is a new show for 2014 can you tell us a bit more about your season of shows?

2014 starts off with Valentines in February and is our new show for 2014. We always try to perform one new writing piece and one Shakespeare every year. Our Shakespeare for 2014 is an all-female production of Macbeth. I have some very exciting ideas for the production but have been sworn to secrecy. All I can tell you is that we are taking a lot of influence from the rise of fascism. I’m a strong believer that you should look to the future but never forget your past. By performing both new writing and Shakespeare we are able to do that and allow the actors who want to work with us as part of the company the challenge of performing a range of genres and styles.

Do you often use the same actors?

Yes and no. I really enjoy working with actors who have worked with me before, as they know my directing style and how I work. Sometimes the things that I say or ask the actors to do comes from what, to some people, may seem like a random place; but it is always relevant to the work that we are doing. It takes time to build up a trusting relationship between the actor and director and I feel that using actors who I already have a relationship with, alongside new performers helps those whom I have not worked with before make that leap of faith to trust me. When I work with new actors they have to get use to my way of working. I try to bring a mix of people to a project as new people always bring something exciting with them as disturbing the status quo keeps us all on our toes. There are advantages and disadvantages working with both new and old actor and I try very hard to make sure that both work closely together and that we all bond as one collective ensemble rather than in small insular groups.

You try hard to make everyone feel welcome, why?

I always say I want “happy bunnies”. I hate unnecessary conflict and have seen what a united workforce can achieve when they all pull together and work as a team. When I was at University and Drama School people on different courses didn’t really mix, let alone work together or know each other’s names. I got by by calling everyone “lovely” or some other generic nickname, which when I look back on it now is appalling. I try to include everyone as much as I can so the technicians and front of house team are encouraged to join in with the warm ups and drama games that we do during rehearsals and before a performance. They are all team building exercises and I want everyone involved in a production to be part of our team. To me it’s vital that everyone from our lead actors, to our technicians, to our front of house team have a shared sense of ownership and responsibility and this is easier to achieve when everyone is happy and working together. If people know who they are working with and what they do, mine is also a much easier job as I’m not answering 1000 questions that are sometimes better placed being posed to someone else. By enjoying the process and all getting along it means that everyone can have as fair and open dialogue across roles, skills and positions.

Speaking of “Happy Bunnies” you had an awful lot of them after the Bloomsbury Festival and the London Welsh Centre Community Drama Group’s performance of Dylan Thomas’ Under Milk Wood. How did that performance make you feel?

I have never been prouder of a group of people than I was on that night. Everyone who was involved in that project will remember that night for the rest of their lives as it was the most amazing performance I have ever been part of. Not only was the show watched and adored by members of the Thomas family but we had to hold the performance several times while we tried to fit everyone in and then turned away a large number of people who wanted to see the show  as well. We had worked for months with the Community performers trying to get them comfortable onstage and with performing in public for the first time. Sometimes it was very stressful but most of the time it was a lot of fun. There were several occasions where I almost cried with laughter; the cast and team were a great bunch who all pulled together and supported each other in the most fantastic way. It feels like a little family when we all get together and I’m very excited about directing them again in 2014. As one of my colleagues said when she watched the performance “the was an audible gasp when after the show the audience were told the performers onstage were not professionals” ….. to me that’s the greatest praise for their talents that there is.

And what is the plan for the London Welsh Centre Community Drama Group in 2014?

If I told you I’d have to kill you.

Valentine’s will be performed at the London Welsh Centre on the 14th and 15th February 2014 at 19.30 for more information please contact us on contact@tigztheatre.co.uk